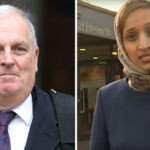 According to Google, the definition of oppression is the prolonged, cruel or unjust treatment or exercise of authority. And according to UKIP leader Paul Nuttall, the burqa is a symbol of oppression and is the latest headline act (so to speak) of the party’s attempt to gain favour. Politicians have used Muslim women as targets for criticism as well as scapegoats for a few years now, however Nuttall’s main points (in his thoroughly inaccurate and logic-deprived argument) are that the burqa poses a security risk, prevents integration and is oppressive against women.
Has Paul Nuttall or indeed anyone else for that matter harboring these views on a public platform ever considered having a normal conversation with a woman who wears a burqa? One tired rhetoric that has been regurgitated constantly is that this garment denies women a voice because their faces are fully covered and it therefore has no place in modern British society. In actual fact, what denies Muslim women in Britain a voice is not providing them with a public platform to verbally discuss their thoughts, concerns and opinions. Faces may be covered, but I’m pretty sure that vocal chords are not. Yet, there are people who make those decisions for us every day and decide that because of the way we choose to express our faith we’re automatically oppressed, repressed…any other form of “essed”.

A classic example? David Cameron. He wasn’t talking about the burqa specifically however there was the classic “Muslim women are traditionally subservient” – I’d love to know how many of us told him that in order for him to reach that conclusion.
It’s the same notion of a decision being made for us without a) our consent or input and b) the most BASIC forms of research. By basic research I mean a conversation, a real, human conversation. A great portion of society love to talk about Muslim women in Britain, but not talk with Muslim women in Britain.

This stems back to an equally infuriating trend where as Muslim women, our bodies and choices are constantly used as political canvases without us having any say in how the picture is painted.

That’s the first step in bringing people together, actually sitting down and being willing to find out about what you don’t know. As far as I’m aware there haven’t been any conversations between Muslim women and Paul Nuttal but somehow he has given multiple TV interviews and stated that the burqa hinders integration, which made me think of visibility and the fear of the unknown. The general consensus is that we’re afraid of what we do not know and what we cannot see, with the burqa it’s a case of “I can’t see your face, therefore I can’t make an instant summation of your identity but I’m not sure about saying hello either”. At the same time, there’s also this constant need to know why Muslim women in Britain do (insert anything here).

And funnily enough, “because it’s my own personal choice and how I choose to express myself as a Muslim and connect to my faith” hasn’t been deemed acceptable. This deepens the irony even further due to ignorant press publications (yes The Sun, I mean you) constantly demanding us to answer for our choices as individuals.
If we choose to wear the hijab or burqa, it becomes everything that defines us and we’re ‘victims of oppression’. If we don’t, we become examples of women who have ‘broken barriers’ and have opted for a more modern way of life. If we wear make-up, we’re not modest enough. If we don’t wear make-up, we don’t make enough of an effort to present ourselves. If we’re practising Muslims, we apparently don’t integrate with society. If we speak out against prejudice, injustice and stereotypes we’re told to calm down and not be so opinionated. If we choose not to because we know that we will receive verbal backlash, we then become mere doormats who have been silenced by the ‘archaic’ rules of our religion.
Damned if we do and damned if we don’t.
Second question: has any harm ever come to anyone in the UK (this article is strictly about the issue in the UK and is not speaking on behalf of other countries) due to a woman wearing a burqa or hijab?
This stems back to an equally infuriating trend where as Muslim women, our bodies and choices are constantly used as political canvases without us having any say in how the picture is painted.
In the aftermath of the attack in Nice last year, The Sun published a column written by Kelvin Mackenzie with the headline “Why did Channel 4 have a presenter in a hijab fronting coverage of Muslim terror in Nice?”. To quote the article, he pointed out that the journalist covering the attack “…was not one of the regulars – but a young lady wearing a hijab. Her name is Fatima Manji and she has been with the station (Channel 4 news) for four years. Was it appropriate for her to be on camera when there had been yet another shocking slaughter by a Muslim?”
The full article is attached below, but let’s delve into exactly how McKenzie’s words exemplify Muslim women being used as political canvases:

“Not one of the regulars-but a young lady wearing a hijab” – So according to Mackenzie a Muslim woman wearing the hijab is not to be considered as regular, but something that unequivocally removes her from the rest of society.
“Was it appropriate for her to be on camera when there had been yet another shocking slaughter by a Muslim?” – So just because Fatima Manji is a reporter who identifies as a Muslim, that automatically puts her in the same category as a terrorist who carried out the attack. Right. Got it.

And then there’s this: “Who was in the studio representing our fears?”
This is probably the most dangerous and divisive phrase in the entire piece. Why would the fears of a Muslim for the safety of fellow human beings be any different to the fears of the general British public? Or do we not count as being part of the general public? All of this this was pinned on just one individual who was doing her job like everyone else.
Despite this, a journalist found herself questioned, scrutinised and placed next to those terrorists simply because of the fact that she was wearing a hijab.
Muslim women in Britain did not have anything to do with these so-called categories or separations being created. Too often do we have parts of our identities be it our faith or the way we choose to live as women taken away from us, then thrown back in our faces as the reason for why there’s ill in the world today or why we can’t achieve our goals.
We do not need to be told by the likes of Paul Nuttall and his ilk that our ways of life or a garment expressing devotion to faith are symbols of oppression.
Because like the very definition of oppression, this constant exercising of so-called political authority on behalf of Muslim women living in Britain today without listening to what we have to say has been prolonged, cruel and above all, unjust.

Raisa is a London born -Hong Kong raised – Pakistani currently working as a secondary English teacher but her love for writing both creatively and academically has never wavered. Her particular interests lie in exploring concepts of gender, feminism and multiculturalism in works of fiction, non-fiction and in the pieces she writes about wider societal issues which affect young Muslim women today.