In the Autumn of 2008, I heard the opening verses of the Quran known as the fatiha which literally means “the opening” being recited by a woman in a retreat setting, her voice angelic, her figure and appearance Marian1. The beauty of her voice, her appearance and her embodiment of love, captured my heart in a way that no other religious recitation or exhortation had managed and I had heard and been subjected to many by then. I had just turned thirty and did not imagine at that time that it would lead some day to co-creating RAY of God with Saimma Dyer.

In the years that followed, I was introduced to a deeper understanding of Mevlana Jalal ud Din Rumi3 and Sufism4 as a living tradition, the piety and strength of Sufi female saints, and the practice of zhikr5 which works subtly on the heart. I also discovered female mystics throughout history of varying spiritual paths, and was introduced to living female spiritual teachers of different traditions. I realised that there was something quite healing and empowering for me to read the words and stories of these women mystics of old and indeed in sitting in the circles of these living compelling women of spirit.

Many people are aware now of the much loved figure of Rabia of Basra6, but less – perhaps – may be aware of the 14th century female mystic Laleshwari also known as Lalla or Lal Ded who – like many other female mystics – thwarted the social customs of her day to pursue her spiritual path. She is believed to have been born to a Brahmin family, and was married at the age of twelve in accordance with the local customs. Some reports suggest her marriage was unhappy and that she left home, at the age of twenty-four to become a disciple of a spiritual leader who was a Shaivite7. As part of her religious education, she travelled alone on foot, surviving on alms, before becoming a teacher and spiritual leader herself. The following vak8 amongst many others are attributed to her:

The potency of her words penetrate deeply into my heart and give a sense of her absolute commitment to “the Real” and her transformed spiritual state. Within Kashmir, Lal Ded has been loved and honoured both by Hindus and Muslims for nearly seven centuries, and continues to be. True spirituality does not divide, it unites.

Such women inspire me and encourage me to nurture my bond with the Divine – also referred to as “the Real” within Sufi tradition – through remembrance: remembering that I am not separate from all that exists. When I rest in this inner knowing, I feel the invulnerability of my spirit. This is a feeling that has often eluded so many of us as women. Often due to restrictive social and cultural constructions about gender which cut us off from our inherent sacredness. This inner knowing is both necessary and healing.

I have heard some say that Rumi was a man with the soul of a woman10, and certainly it seems to me that he became the entry point for our work in exploring the Divine Feminine. Saimma and I had been initiated into the Mevlevi11 Sufi tradition and had later formed an organisation (with other friends) called Rumi’s Circle which sought to share Rumi’s loving, unitive wisdom with as wide an audience as possible. It was within this very intentional work of Rumi’s Circle that the idea of exploring the Divine Feminine with other men and women began to take shape and indeed our first two retreats around this were held under the auspices of Rumi’s Circle before we formed RAY.

The name RAY is taken from some well known lines from Mevlana:

The Ray Festival, is a space to explore and celebrate the experiences and insights of women – many of whom are religious and spiritual leaders, some are academics, and others activists – the fruits of their faith journeys and their struggles to find their space within and through the respective roles they have felt called to. We believe and hope that such sharings will be affirming of and for women and all genders, that these insights might touch, inspire and expand the hearts present. Our intention is to hold the conversations intentionally, heart-fully, and prayerfully. Over the years, over many such heart-to-heart conversations in our Sufi circles, our retreats, and in other limited spaces, we have experienced the change that can be affected by speaking from a place of the heart: a place from where one is not hoping to impress anyone but to simply share from one’s inner knowing and experience. We have witnessed the deep impact of practising and listening open-heartedly to such speech both in ourselves and in others and are hoping to bring this practice to the Festival.

The two days will be bounded by meditation and contemplation, and there will be opportunities within each day to connect with the body and appreciate its role in our healing and its wisdom. We are interested in a “full-being” experience so that not just our minds are included but every aspect of the self: mind, heart and body.

Our vision for RAY:

RAY seeks to promote feminine spiritual wisdom to help realise God in all ways, and to align with justice, truth, and beauty. The energetic state of the feminine is our guiding principle and holds our intention, and we believe that all genders hold the feminine and masculine within themselves. While we are women-led and women-centred, we welcome and encourage all genders to join us in a safe, inclusive space.

We see that it is crucial for the masculine and feminine to be in “in mutual embrace”13 as qualities or energies, and the need for all genders to work together for deeper equality and the healing of the whole of humanity. Equally, we passionately feel that the “feminine way” has a gift for us at this time and it is calling for its realisation in each of us. It’s gifts are perhaps most visible at present in women who are seeking to live consciously and creatively. In these challenging times in which we live, we feel it is important to bring together such a rosary of women from across religious traditions in order to affirm our underlying unity and to bring to the fore feminine wisdom in the form of the heart-full insights of women. I return in these days as we journey closer to the festival, to two words from the sweet lady through whom I first really heard the fatiha:

Join us in seeking to promote feminine spiritual wisdom. See https://rayofgod.com/rayfest20/ for information about RAYFest20: the schedule and bios of our contributors and to register to join us for this weekend long on-line festival: 31st October-1st November 2020 (inclusive). 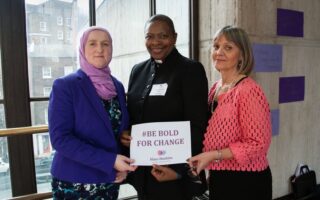 Muslim and Jewish Women come together for International Women’s Day 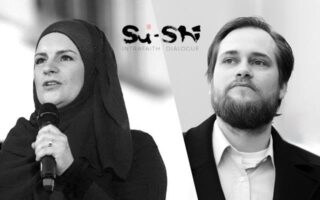 ‘Su-Shi’ and interfaith dialogue with Anne Dijk and Arjen Buitelaar