This is a review of ‘We Wait In Joyful Hope’ by Brian Mullin, shown at Theatre 503 on the 5th of June.

Joanne: The sacraments are a great source of strength. I know you believe that.

Bernie: I don’t believe I need a man to access them.

Women of faith are not immune to the desire of men to take control whether in a Church or a Mosque. Brian Mullin’s play takes us into the life of Sister Bernie who instinctively, ferociously battles male encroachment of her spiritual and work space. Sister Bernie is a streetwise radical nun who displays her rebellious attitude with cheeky slogan t-shirts, sugary soda and sweets topped off with a thunderous voice. Her words are a lifelong rallying cry for the troubled women of her community. Sister Bernie represents the thinking woman of faith who seeks to follow the ideals of her religion. In the sixties, Bernie like many nuns in the Catholic Church chose to re-evaluate the merits of cloistered existence away from people on the streets. To act on her impulse, to make radical change in age old traditions, to interact with society is significant for religious women’s empowerment.

Joanne, a relapsed nun and estranged friend of Bernie, is in contrast straight backed, wearing calm, neutral colours, visibly nervous and softly spoken – we imagine a woman who will always conform. She says she is there to help Bernie with her charitable work but we sense Bernie’s suspicion of Joanne’s intentions from the start. During the course of the play we learn of Joanne’s involvement with Bernie in setting up the alternative mission as young nuns. Joanne reveals Bernie’s early questioning and exploration of the purpose of religious devotion. Were they serving God and his creation effectively by living away from the world’s problems? We see that even the sweet timid Joanne has desire to break with order, discipline and seek answers in the wild streets of life lived. Felicia is the teenager who seeks shelter with Bernie who is wise enough to give space to the distressed girl but also some firm advice and security. The mission is a place where men are barred, to the annoyance of Father Grady, where women know best how to care for one another. The play centres on their friendships and lovingly displays the tender, sensitive nature of their feelings. Bernie and Joanne reminisce and smoke a joint like pros whilst we hear the thundering rain and sit back taking in the evocative, warm radical poster clad set.

There are moments spread throughout the play where Bernie seems a very lonely bitter figure. She is a woman who has given her life to serving God and her community but who chooses to ache alone. She has learnt to believe in God on her own terms and stands against the approaches of help from the Church and Joanne. Bernie is savvy enough to suspect Church hierarchy may rein her in and even collude with moneyed interests. She speaks like a woman who passionately wants to always stand against male domination and corrupt capitalism. Father Grady challenges her opposition to his regeneration model. Bernie recognises the tide against her mission, her community and work is too strong. and change will happen despite her protests. The play highlights the difficult realities faced by communities in the face of sweeping social structural reorganisation.

The beauty of the play lies in the strength of the two elder women who have both lived through tremendous reflection and personal choices. It was refreshing, joyful and empowering to watch them battle each other over their past friendship but also their continued affection for each other. The sense of sisterhood and solidarity between women is most convincingly portrayed throughout and perhaps Sister Bernie’ s best triumph is in directing her protégée Felicia away from misogynistic violence and poverty. Bernie is strong but increasingly fragile and it is at the hands of Felicia the hot-headed feisty dreamer that Bernie finds love and a future.

‘We Wait in Joyful Hope’ will be shown at Threatre 503 until the 11th of June, see website for further details and how to book. 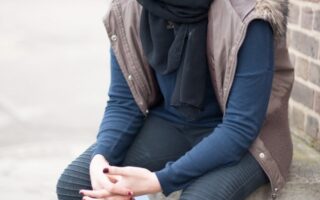