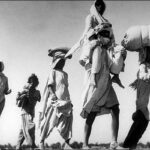 “Partition. An event that would drastically transform the South Asian landscape forever.”

August 1947 – a month that not only saw the division, murder and separation of thousands of people, but the creation of two new nation states in the region. 70 years on, I discuss my experience and understanding of Partition – as an Indian-Pakistani British Asian – and how an event that happened long before I was born has had a significant impact on my life.

Partition. An event that would drastically transform the South Asian landscape forever. With the end of British rule in India, tensions had been rising within the region, with various groups fighting for recognition and representation. The creation of Congress saw the rise of individuals like Mahatma Gandhi & Jawaharlal Nehru, but also others like Muhammad Ali Jinnah and Sir Syed Ahmad Khan, who were key figures of the Pakistan movement. After protesting that Muslim voices, which formed a large part of the population in India were being repressed or even ignored, these individuals rallied for the creation of ‘Pakistan’, which initially was not meant to be a separate state, but rather a movement that would allow the voices of the Muslim community to be heard.

It should be pointed out that these tensions had been rising for many years prior, however their culmination fell on these two days, which saw large amounts of bloodshed. Neighbours turned on each other, parents were separated from their children and familiar faces became strangers over night. Even today, the South Asian community suffers from grief as many individuals still have no idea where their loved ones went. Home was no longer home for many millions of people.

But 70 years on, how did this come to affect the South Asian community? And how is partition viewed amongst the diaspora, especially here in the UK?

As a woman who can claim heritage to both nations, I believe that my experiences as a half – Pakistani and half – Indian can help shed some light on this. Anyone who has grown up with a mixed heritage will always tell you how hard it is to formulate an identity. Add to that the scars of a large political event like Partition, ultimately formulating your identity becomes even harder. Either you are not ‘Pakistani’ enough or you are not ‘Indian’ enough. Growing up was hard because ultimately you faced criticism from both sides. Aside from being called names from both sides, such as being a ‘betrayer’ or a ‘fake Indian/Pakistani’, there was this feeling that on either side, I was never truly accepted.

The biggest pain that is felt however, is the idea of travelling to my homelands. Due to the stringent visa requirements, India can refuse entry to those who have visited Pakistan or hold a Pakistani national identity. With the rise of the far right Hindu nationalist party in India, not only have hate crimes against Muslims become more prominent in India, but the idea of going to India to see my own family is a process that makes me nervous. As a half – Pakistani, I have to fill out extra forms, provide more details than my non – South Asian counterparts, and even then there is all the chance that I may be rejected for a visa. It means that any holiday I make is a decision to choose between two countries and two parts of my family. Tell me, how does one make a decision between two homes? If I visit my family in Pakistan I miss out on visiting my family in India. And this isn’t just me, seventy years before me, thousands of families were ripped apart as a result of partition. However my pain and trial is nothing compared to the hundreds of thousands of families that are still living today with no idea where their husband, wife, daughters or sons are after the horrors they went through during the month of August in 1947.

However, my mixed heritage has allowed me to experience some wonderful things. As a Indian – Pakistani Muslim I have had the pleasure of seeing how Islam is practiced on both sides. I have been able to witness amazing architecture and I have the opportunity to visit both countries, even if it is difficult. I have seen that the underlying South Asian culture that exists throughout the region, which whilst having its differences and its fair amount of issues, also shows some incredible amounts of similarity. As Indians and Pakistanis, there is so much more that unites us than divides us.

Today more than ever, the South Asian diaspora is coming together to put aside our differences. The British South Asian community is a perfect example of how individuals, regardless of religious beliefs, come together to celebrate a common culture. Even within cricket, better sportsmanship and communication is taking place between players on both sides to show how we can remain united, despite our countries being stuck in political turmoil and opposition to one another. Bollywood is starting to push its boundaries across the physical borders that exist and showcasing up and coming talent from Pakistan. Not only that but its increasing criticism and attempts to show the unity between these two countries though movies like Bajrangi Bhaijaan gives hope to those of us who believe that one day, despite the political, social and cultural problems, our countries will become friends.

Zahraa A is currently going into her final year of my International Relations degree. She loves anything and everything political or historic, with postcolonial theory, feminism and anything surrounding political movements from the PoC/BME community, Muslims and her own South Asian culture being her key interests. She blogs at ‘The Muslim Diaspora‘.