My honeymoon. My wedding dress. My glasses…

“When me and my husband have been so close to divorce several times in this first year, it feels unnecessary and inaccurate to “celebrate” our first anniversary.”

I’ve just marked one year of marriage. I say “marked” rather than celebrate because it has been a such tough year. When me and my husband have been so close to divorce several times in this first year, it feels unnecessary and inaccurate to “celebrate” our first anniversary. What would we celebrate? Surviving? That we held on? That I spent so many nights and days crying, begging my husband to give me – and us – some distance from his family so that we could work on us. I know the first years of marriage are always tough, I never expected it to be a bed of roses and all romance and glamour. But I also didn’t expect my in laws to criticise me on every little thing. And it is EVERY little thing.

It started very very early. Before I was even married. I was told what I could, and more importantly, COULDNT wear on my own wedding. I dreamt of my outfit, like all girls. The princess dress, the jewellery, the tradition. But I was told “no, that’s old fashioned. I don’t like it. You should wear this.” I respectfully disagreed and said this is what I’ve always wanted. So I wore what I wanted – and more importantly, what my husband was happy with. And boy, a year since my wedding and I STILL hear about how wrong I was…

I don’t live with my in laws, there’s no space in their house. Everyone told me this was a blessing. And considering the strain they’ve had on my marriage, I know for a fact if I did live with them, I would have been divorced by now. But everytime I do go round – which used to be several times a week, but now less – I was always always criticised. For not wearing jewellery. For not wearing make up. For wearing my glasses. I dress modestly. Abayas and long dresses, I’m not a flashy person. But my MiL wanted me to be more “beautiful”. Then I was constantly made to feel like a bad wife and daughter in law. Pointing out things to me like my husband hasn’t had a hair cut, or he’s wearing an old tshirt – apparently it was my fault that my husband chose comfy clothes over dressy ones, it meant I wasn’t looking after him. Because I didn’t spend every single day with them, “so and so’s wife stays at home everyday and cooks with her MiL”. Then there was the time I was in an and out of hospital for over a month, seriously ill, close to multiple organ failure if my illness hadn’t been caught in time. My MiL didn’t come to visit me in hospital. But she would ring me. To ask when I’d be home again because “my son is alone and I don’t like it when he’s alone”….

The best was when we had to go to a relatives house soon after marriage. My husband chose my outfit, a pretty black abaya with turquoise sequins and embroidery – AND I wore make up. In front of my husband, my MiL said I looked nice. As soon as my husband left the room –

“You shouldn’t listen to him when he tells you how to dress, you look rough.” And then when my husband would question her on it “I was just joking, where’s her sense of humour?!” If had a penny for everytime she’s used that after saying something to me…

All marriages come with strains, pressures and expectations. But when they come from the in laws rather than the couple itself, it can have devastating effects. My husband and I have barely managed to scrape through our first year of marriage. And it saddens me, because it’s not due to us. We haven’t failed as a couple. We love each other, and obviously have our normal ups and downs. But our culture needs to change. Our parents generation needs to understand that their boys don’t get married for the sake of their parents, that their son’s wives aren’t for them to belittle and dictate to. They need to understand that their son’s wives are human. That they’ve sacrificed everything when they got married. They left their own family behind, possibly even moved cities. And the last thing they need is to be told they’re not good enough. Instead they need to be welcomed. To receive kindness and love. This woman is your son’s happiness. She is someone’s daughter. And if you wouldn’t speak to your own daughter like that, then why would you think it’s ok to speak to someone else’s daughter that way…? 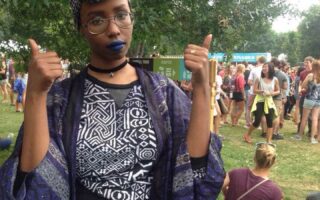 The Darker the Berry the Sweeter the Juice