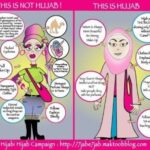 Amongst the plethora of Islamic chain messages I receive on a weekly basis, I can always guarantee, without fail, one or two “how not to wear Hijab” forwards. Don’t be amazed by my talents of predicting a pending message. Be dismayed at the whirlpool of intolerance that we are contributing to.

There is nothing more shameful than a shaming exercise of those who choose to express variety, style and colour in their hijab identity. For someone who does not wear the headscarf, I’m sure I’m the absolute pinnacle of indecency for the messengers of the chain message. It’s the worrying trend of hypocrisy and feeding a mindset of intolerance that worries me about our muslimah circles.

Stop the nit picking. Those who lead the charge of sanctimonious preachood tend to be the leaders of inconsistency themselves. It’s sods law. I wouldn’t notice your headscarf fashioned on Benazir Bhutto if you hadn’t scolded another girl for showcasing a single strand of hair. Oh and your visible disgust at her audacity to go floral is nothing compared to your blinding sequence display the day before. Own up, you’re a little partial to bling. But who am I to judge you? So don’t judge her. And that’s the most important thing. If hijab is a symbol of modesty then it is our reaction to it which needs to be in line.

Judgementalism was never a virtue of modesty.

Muslim women’s clothing has always generated talking points and been used and abused in politics. Most of us are familiar with the “outside narratives” of the hijab. It sometimes gets disguised as feminism, anti-immigration, anti-muslim and anti-social. But it’s just feeding into an anti-tolerance, which at its core stokes up fear of the other for political gains. And then there’s the “inside” problem. One that recently came to the fore when social media erupted about the Mipsterz video that showcased a colourful array of headscarves. It shows our own intolerance for ourselves.

The worst is when the outside and inside cross pathways and then arises the divide and rule scenario. Let’s not place ourselves into a such a vulnerable position. Let’s learn from our history of being colonised and overruled by imperialism.
Do you think I’m being a tad bit over dramatic here? Well I’m not the one who finds conspiracy theories at every walking corner. So I’m surprised you’re not open to this warning message. Or is it cos I is a non-hijabi?